Annette’s law practice remains devoted to all matters family. She is committed to providing competent services to clients going through difficult times such as divorce, custody disputes, severance and termination battles as well as dependencies - challenging DCS for the return of children to safe homes. She herself understands divorce, co-parenting dilemmas, child support issues and even severance and adoption concerns.

Her practice – while established in Tempe in 2012 – has returned to her hometown. In December 2017, Annette opened a permanent office in Chandler, near her alma mater high school. We put your family and its future first! 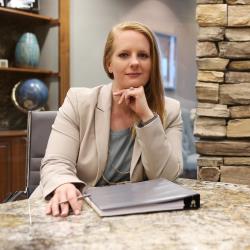 Annette began her practice in the criminal defense and juvenile law areas, acting as both defense counsel and Guardian ad Litem.  Annette's current practice focuses on helping families during their most difficult times, such as divorce, custody and other such disputes.

Annette attended Arizona State University, Walter Cronkite School of Telecommunications and earned her Bachelor’s in Broadcasting.  After working in the TV news field as a producer, she returned to ASU to study law and graduated from ASU law school in 2004. Annette has three children from a prior marriage; two stepdaughters; and a daughter and son together with her current husband, which has created a large, busy but very loving, blended family.